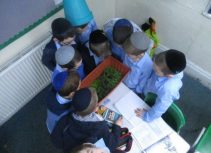 The new tailor-made service began in September 2020 because staff at OYY Lubavitch Boys’, a mainstream school wanted to explore how they could better serve boys who are not officially recognised as having SEND and also those children who are unable to cope with a rigid classroom setting. Some children are uncomfortable with a full-time structure, others have been excluded from school following disruptive outbursts or because their particular learning barriers make it hard for them to learn and participate constructively in a standard classroom.

“Some of the children feel as though they are outcasts, separated from their siblings during the day while the others go off to school. They feel terrible.” Said Rabbi Mendel Cohen, Headteacher at OYY Lubavitch Boys’ School.

But thanks to Delamere funding, the school now offers a flexible approach to learning. Families have the opportunity to combine a number of pre-booked sessions at school with online learning, allowing the children to learn at their own pace. By doing away with the concept that all children learn in a standard way, the school has given families more options to enhance the education their child receives. For those who wake early and are enthused to learn, they can begin work early on a computer at home. For others who want to stand up while they learn at home, they no longer need to be concerned by the reaction from the other pupils.

“There are so many advantages of blended learning. The children have individual learning that they can take responsibility for, which is something they really feel good about. It makes them feel human” observed Rabbi Mendel Cohen. The blended approach is so child-focused that parents can even choose to book their sons in to attend school at break times, if they want them to benefit from social interactions on that particular day.

Elchonon Cohen, a teacher and father of a child with SEND who benefited greatly from the education at OYY Lubavitch said, “My son wasn’t ready for mainstream school. It was crucial for him to have that intermediate stage which could help him grow and move to the next stage of his learning. OYY Lubavitch Boys’ School facilitated one-to-one learning, which combined with his mainstream teacher and access to a computer, really helped him. Speaking of his gratitude for the funding OYY Lubavitch was granted by Delamere Charitable Trust, Elchonon Cohen said, “There’s no greater work you can do, than giving a place to a child”.

While the project was planned well before lockdown, the restrictions brought on following the COVID-19 pandemic kickstarted the school’s use of technology. The SENCOs (special educational needs coordinators) observed that some children were able to focus better on their work and were much more motivated overall since they began working on computers. “For those children with special educational needs and disabilities, a computer screen can do something to channel their focus, helping to eliminate distractions which prevent them from learning”, noted Rabbi Cohen.

Delamere Chair Malcolm Joels remarked “We started funding OYY Lubavitch Boys’ School in 2017 to provide helpful support to a school needing to teach children with learning disabilities. Impressed by their success in building a range of imaginative SEND support services delivered in a cost-effective manner, we happily continued that support. This latest development into blended learning is really impressive as it helps struggling children who would otherwise fall between the cracks.”

The coronavirus pandemic cut the value...

As the current crisis emerged, Delamere...