Delamere was delighted with its successful sponsored group  “Tramathon” on Thursday 29th May 2014 when a group of enthusiastic supporters (mainly grandparents and over 60’s!) travelled the entire 48 mile length of Manchester’s Metrolink tram network, visiting all 77 stations and registering 155 stops. In so doing they raised over £5,000 to help maintain Delamere’s support for Club Tikva and JSENSE.

On completion of their eight hour challenge across the network, they  visited Bury Town Hall where they were greeted by the Lord Mayor (Councillor Sharon Briggs), Lady Mayoress (Mrs Shirley Rabbitt), and Mayor Elect (Councillor Michelle Wiseman).

The “Tramathon” idea had the official support of Transport for Greater Manchester (which owns Metrolink). 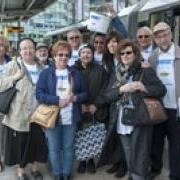 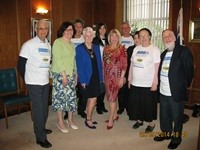 Delamere Charitable Trust has found a...

Delamere Charitable Trust is to celebrate...